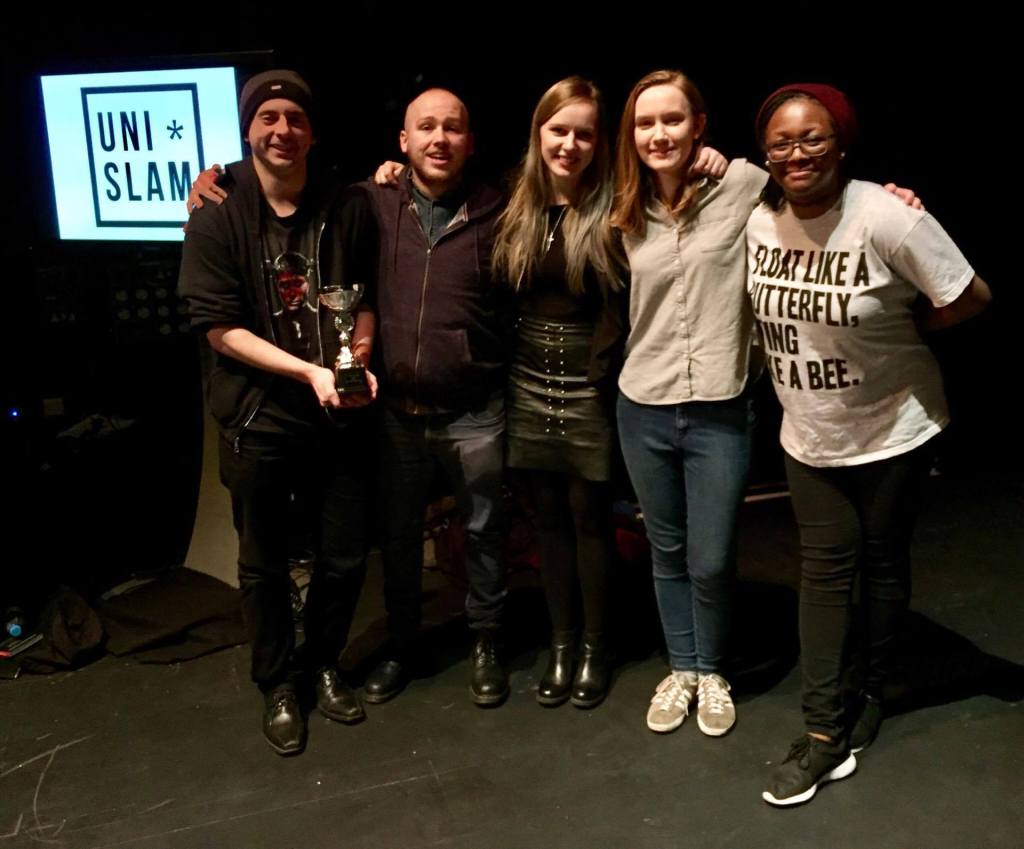 We came second! And we’ve been invited to CUPSI!!!

That’s pretty much the gist of it, but I’ve written in more detail about the crazy past weeks below.

Last time I wrote about UniSlam, it was shortly after I’d auditioned to join my University’s team. In the following weeks we had about five or six meetings where we brought new poems to the group and gave each other feedback. I think we all found that incredibly useful, and it certainly led to some important improvements in my own work. A more painful part of the process was narrowing down our group’s poems to the required twelve for the competition – four for each of the three rounds. This involved ranking each other’s poems from one to five, which was a pretty horrible and awkward process, although we managed to do it as sensitively as possible and fortunately no one’s feelings were hurt! We also had to decide on the order we’d put the poems in for each of the rounds. This was again difficult, as we had to ensure that…

This involved a lot of shuffling around of post-its on a wall, but eventually we came up with an order we were all happy with. We placed a ‘polyvocal’ poem, where two of the team performed together, in the preliminary round so that all five of us would get the chance to perform.

After a random trip to Dublin with two of my teammates, where we visited three museums, performed at an open mic and drank whisky for nine hours, we met up with the others and headed to Leicester for the slam.

The first day (Sunday 29th Jan) began with three one-hour workshops with professional poets. They were really fantastic; I particularly enjoyed Hannah Silva’s workshop, ‘Sound like yourself’, where she explained that cliches can exist not just in content but in performance style too, with poets often thinking it’s cool to deliver lines with enigmatic but ultimately meaningless pauses in the middle of lines, or to trail off at the ends of them. The workshops were also a great chance to meet and socialise with the other teams, and the atmosphere was lovely. Throughout the whole weekend, everyone was incredibly supportive of each other and there was no sense of a competitive rivalry; everyone genuinely wanted each other to do well and were simply there to perform the best they could and have a good time.

Later in the day we watched one of the preliminary rounds before performing in our own. By complete chance, two of the three other teams in our prelim also ended up making it to the final, so the standard was extremely high. We made it through in second place, and felt slightly shaken by the experience! We knew that we’d have to be at the top of our game to get through the semis.

That night we were up late rehearsing. Although I didn’t have a poem in the second round, I practised my poem for the final (This City). The next day we headed to the Curve Theatre and watched one of the semis, had a short break where we rehearsed some more, then competed ourselves. It was really nerve-wracking watching my team perform, but they did amazingly and we made it through to the final in second place. What followed was a tense few hours of pacing empty staircases and mumbling at walls, going over and over and over our poems. By this point I was in a sort of stress and poetry-induced trance, with lines from my own poems and from the dozens of other poems I’d heard over the past few days spinning in my head.

I think a lot of people felt the same way, because to begin with the atmosphere at the final felt strangely subdued. Fortunately the host, Laurie Bolger, was hilarious and did a great job of keeping everyone hyped up and positive. We also got to enjoy poems from the judges which was amazing.

At the end of the night, when the scores were all added up and Birmingham was called out in second place, I was pretty much in shock. I couldn’t quite process that all the work our team had put in over the past month had led to this, and that suddenly everything was over. I think I also felt a bit of ‘imposter syndrome’ – I’m still so new to spoken word that I didn’t quite feel deserving of my part of our team’s second place title. I was also fully aware of the arbitrariness of the scores – every single poet who had made it to UniSlam was uniquely talented and had something important to say, and poetry is of course highly subjective.

I drifted through the next few hours, stammering my way through conversations with judges and members of other teams, all of whom were incredibly kind. One of the best things to come out of UniSlam has been making connections with poets from across the UK. In the days after the competition we’ve kept in touch over Facebook, with people sharing photos taken over the weekend and links to their writing pages and blogs. The world feels just that little bit smaller after UniSlam, in a really positive way.

Just as the result of UniSlam was finally sinking in, we got the news that our team had been invited to compete in the College Unions Poetry Slam Invitational in Chicago this April. We’re all over the moon, and I’m so happy to get the opportunity to keep working with my team, writing and sharing new poems with them. When I first auditioned for the team it was pretty much on a whim, and I didn’t imagine the friendships I would make out of it, or that we’d end up competing in the U.S!

We’re probably going to begin meeting up, rehearsing, and planning a fundraiser to help with travel costs soon. Right now I’m still sort of reeling from everything that’s happened, but I’ll update this blog when I’ve got more news.

iThere are no comments

Begin typing your search above and press return to search. Press Esc to cancel.